I woke up about 7am to cold, crisp air and birds chirping and singing; I could hear squirrels scurrying through the leaves on the ground, and I could hear their claws on the bark as they ran through the trees. I lay there for a while listening, thinking about what I’ll be doing today, dreading getting out of the warm sleeping bag.

Last night was spent walking down the hill and then back up. Today, I would start up the hill a ways and then back down, extending the distance and adding weight to the pack each time. As I was thinking about this, I found myself already out of the sleeping bag, getting dressed, kind of on auto-pilot, I guess. I stretched my sleeping bag out over the bear box to air it out.

Until the sun came up over the mountains, it was going to be pretty chilly. I zipped the legs onto my pants, threw a fleece sweater on and walked down to get some water.  Believe it or not, the water is one of the high points on these trips.

The first time I was in Bishop, was with an adventure group in 1999. We were doing a six day outing. I wasn’t sure what we would be doing for water, and iodine packets didn’t sound very appealing to me, so I packed four liters of Aqua Fina, hoping that would be enough for the trip. My n00b was really showing; the four liters of water I had packed were gone the morning of the second day. A couple hours into the hike that morning, the guides stopped at a lake to refill our water supply. I followed one of our guides over to the lake with my 2L skin and Nalgene bottle to see how he was getting the water and to interrogate if need be. It looked like he was pumping the water straight from the lake. He asked if I wanted to use the filter to fill up my containers and passed it to me when he was finished. I asked if the water needed to be treated afterward, and he just laughed and said, Taste it. I’ve been a fan ever since.

The campground has a pump and a well with some pretty good water and I filled up. When I got back to the campsite, I mixed some Tang, threw a few things in the backpack and headed off, up the hill.

The pack was pretty light and the going wasn’t too bad, considering it was all uphill.

I made my way to the, Grass Lake / Lamark Lake sign and turned around.

This turned out to be a little tougher than the dirt road the night before, and I wasn’t looking forward to heaving a full pack up this hill, tomorrow.

When I got back to camp, I did a ‘mental coin toss’ and decided that the next time up, I would take the camera and go all the way to Grass Lake.

I sat in camp for about a half hour, finishing the Tang and eating some jerky and trail mix. When I finished, I loaded some food, the stove, some extra layers and water in the backpack, grabbed the camera and headed back up the hill. 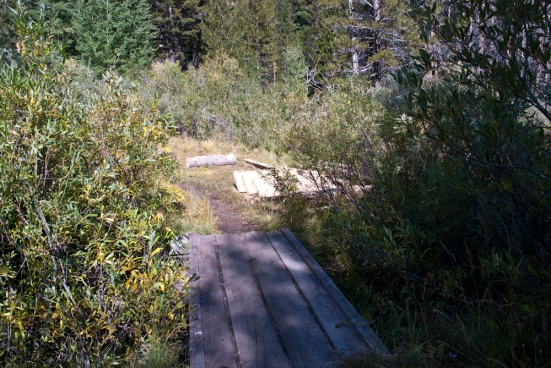 This time, when I got to the sign, I turned and followed the trail to Grass Lake. I couldn’t believe the scenery along the trail! There was something different at every clearing!  It seemed like, every other step, I was taking a picture! 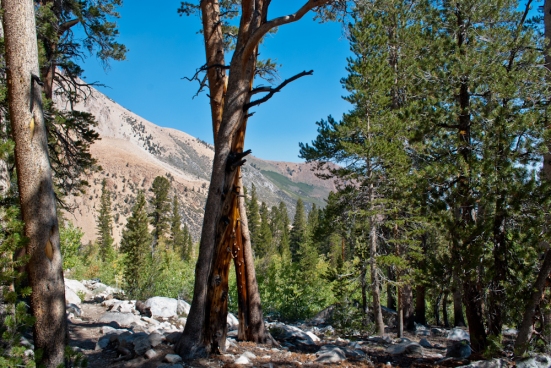 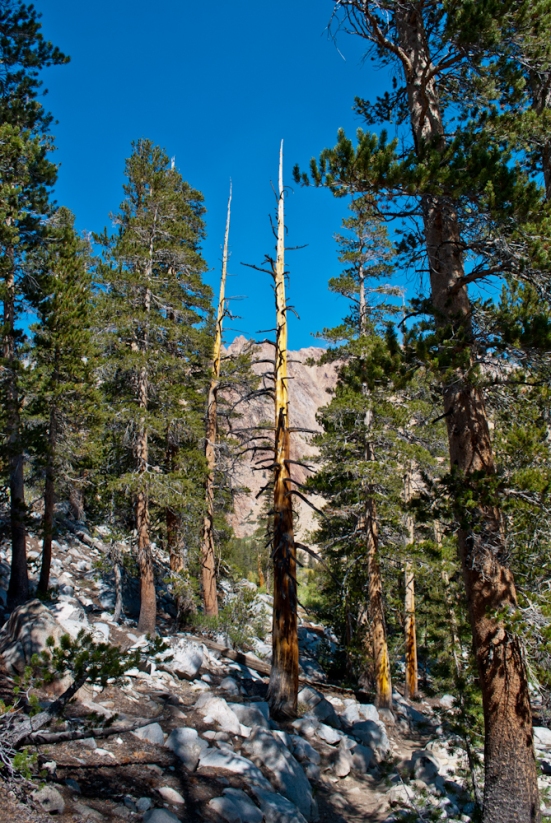 When I got down to the lake, there were three other people down there, hanging out, exploring. I walked around and took some pictures and then headed back up the trail, leaving the people with the lake to themselves once again. 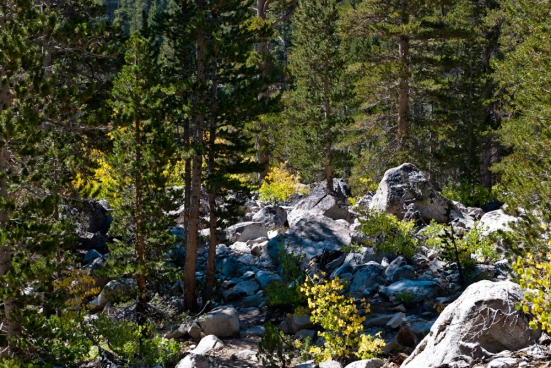 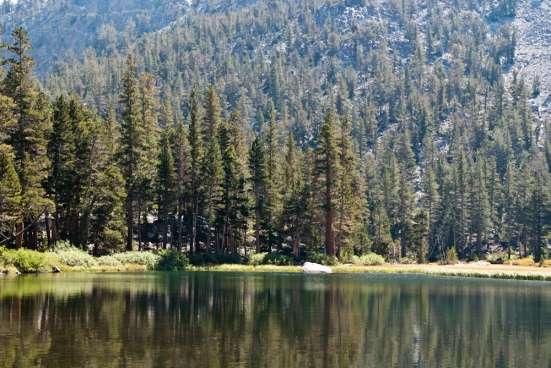 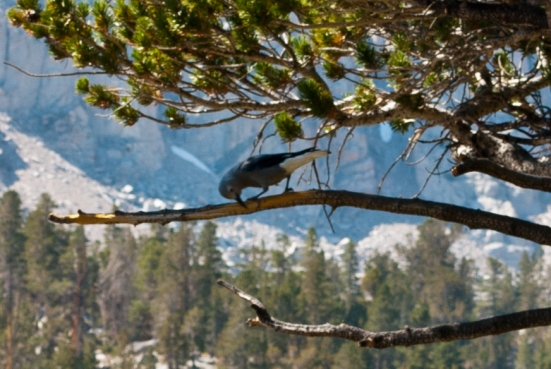 When I got back to camp, I ate lunch and rested up for a while. After that, it was time to do it again! I loaded the backpack with everything except the tent and headed off for the sign.  The pack weighed about 60 lbs without the tent in it and it was tough humping it up that hill. 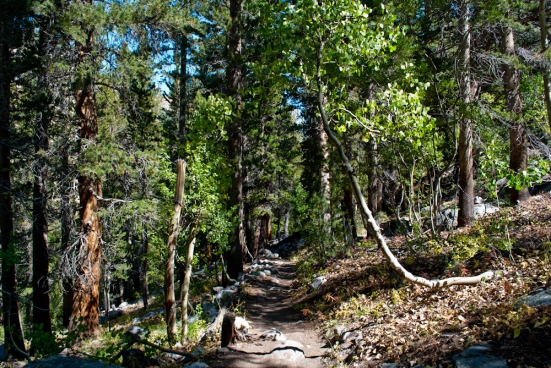 I had trained back home for this trip, and that was paying off now, but I still hated every step! I finally reached that blasted sign and turned around.  With the pack on, it seemed like it took longer to get down!  I was so glad when I reached camp!

I was hungry again and that was a good thing. Although my muscles were screaming, I didn’t have a headache…and that was a great thing! I made some more food and sat for few more minutes. When I finished, it was about 4pm…I couldn’t stop staring at the backpack, and to my horror, before I could do anything to stop myself, I had it strapped on and was heading back up the hill. Every twenty steps, I wanted to turn around but my legs kept moving. All I could think about was how much I hated my other self…the one that strapped this pack on…again…and is making me carry it up the hill, but my legs kept moving. There was a point I had almost convinced myself that I had passed the sign, so I might as well turn around, but my legs kept moving, and eventually, I put my hand on that sign for the fourth and last time.

It was evening by the time I came crawling back into camp. My body was wracked, but my mind wasn’t tired and just wanted to take it all in. I sat in my camp chair and listened to the squirrels. 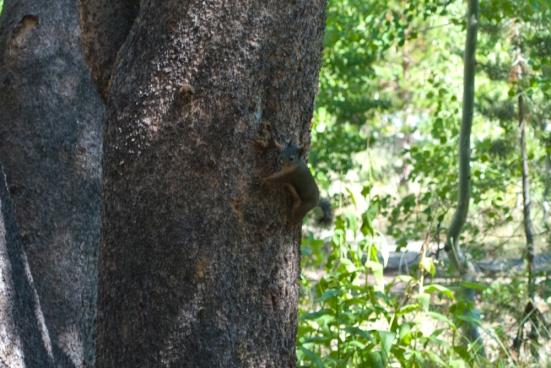 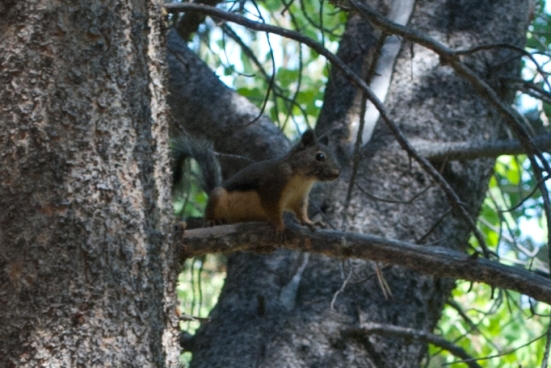 I could hear them greeting one another from different parts of the campground. When one would venture too close to another’s territory, a long vocal dispute would break out, only to be ended when the trespasser was chased back into his own territory. Once the situation was remedied, the squirrels would call out to one another again and you could hear the responses in the distance.

The squirrels were playful, and very photogenic. Hanging out with them was a great way to end day 2!