I woke up, and Tomorrow-Guy was nowhere to be found. It was about 7:30 and I mixed some Tang and poked my head out of the tent, then climbed the rest of the way out. It was still cold, but there was no wind to speak of.

The sun was taking its time clearing the peaks. There were no clouds and despite the lack of direct sunlight, it was very bright.

I looked around and was disappointed; I’d have to take a few more pictures before I left. Last night, my camera battery was at one bar out of five and this morning, after removing it from my pocket, it was back up to two bars. The truck was three days and two nights away and I wouldn’t get to Upper Pine Lake until tomorrow evening.

The outside of the tent was coated with frost, which was barely beginning to melt. From outside, the inside of the tent looked warm and I wished I could have stayed another day, but I had to get going.

I removed the rain-fly from the tent and shook as much frost off as would come, and then laid it out over the biggest boulder I could find to melt and dry.

Then grabbed my Tang and the camera and went back out to the chair and tripod and took a few more pictures. There was no wind, and the reflection couldn’t get any better.

After a few minutes,  turned the camera off and sat, staring at the south end of the lake, thinking.

From up here, wherever I decided to depart from would have a big impact on how many miles would be added today once I reached the trail. If I could find a way down from the south end of the lake, once at the trail, I’d be almost a mile behind where I could hit the trail by finding a way down from the west side of the lake. Finding a way over Pilot Knob would take six to eight miles off of the overall total, but I still didn’t see that happening.

The map showed the south end of the lake as being about a quarter mile away from the trail, both vertically and horizontally with a steep start at the top that gradually started to decrease in pitch about halfway down. There was a small runoff stream that was marked on the map that started from the south end of the lake and crossed the trail, depositing into Piute Creek, south of the trail.

The map showed the same distance to the trail in a straight line from the west side, but considerably farther up the trail. Unlike the south, if I could find a way down the first and steepest part of the west side, I’d be able to skirt ridges and maintain my elevation while continuing west and be able to turn north in a shorter distance.

After thinking about it, the decision kind of made itself; I would try the west side.

I got up from the chair and headed over to try and find a route. When I got over there, I climbed down a few spots, looking for the best place to go over the edge. The initial climb down was about a fifty foot, steep walk to a ledge that was about ten feet wide. From there, I would have to sit down and scoot over with my backpack on. I searched this area until I found a spot that looked best. I climbed down a little ways and sat, searching for the best place, once I cleared the huge boulder stack, to continue.

I couldn’t believe I was going to do this. I sat for about an hour, on the ledge, studying the terrain and then finally got up and went back to camp. The rain-fly was just about dry, the sun was up and it was about 11:00.

I went into my backpack and removed my wallet, Leatherman, whistle and 50’ of 3mm utility cord and put them in zippered pockets on my person.  Then I emptied all off my water and tightened up the pack.

Back over at the ledge, I stood, looking over for a minute and then proceeded down to the area where I would climb over and down into an almost vertical stack of huge boulders. 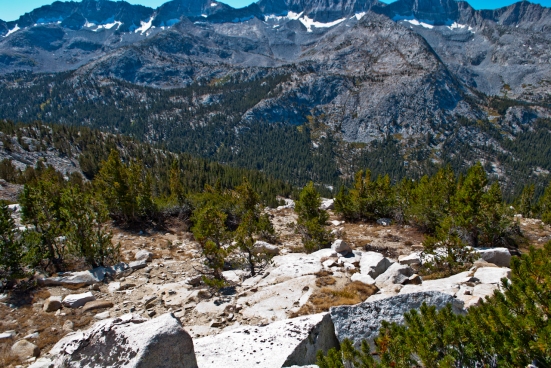 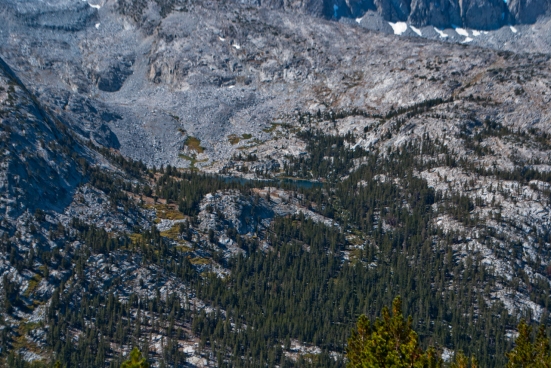 I sat and looked for a few minutes; I was troubled that although from here, I could see down… I couldn’t see all the way down and where I lost sight of the route was still pretty high up.

While I was still pleading my case, Auto-Pilot-Guy kicked my legs over the edge and I was on my way. Near the top, the boulders were big enough to sit in between to maneuver without too much exposure. The going was very slow but the pack was behaving and I was glad I was wearing it, and not trying to carry it and lower it.

I had better control facing out while climbing down through the boulders; sitting and scooting, through, over and around, lowering myself down, using hiking poles. When I did have to maneuver face in, it was very awkward with the weight of the pack wanting to pull me around. I found the ratio of climbing sideways to down was to be about 1:1.

Once past the boulders, there was slick dead grass coating the slope and I could almost reach straight out and touch the ground. 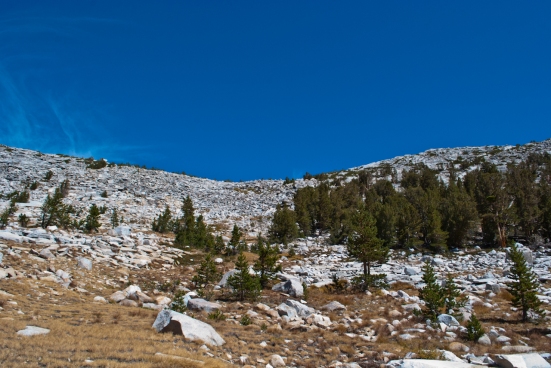 I moved down the slope a little where it wasn’t as steep and then started to skirt west, parallel to the trail below. It was difficult to maintain the elevation moving west, and after about a half mile, I was coming down into the tree line. I could hear Piute Creek in places and knew the trail was pretty close, but still down in elevation quite a bit.

The interior of the tree line was steep and littered with shattered trees that had been bowled over by boulders that had fallen from high above. Some of the trees, both living, and the ones lying on the ground were pretty big. The air was filled with the smells of the forest; I could still smell smoke in the air mixed now with pine and the earthy smell of the dead trees turning to mulch.

I decided to quit fighting the slope and made my way, the rest of the way down to the trail. When I got down there, I was exhilarated! I had never tried anything like I had just done, before. I have been on big steep hills before… but never on this scale.

I was thirsty and filled my water bottles in the creek and then went back over near the trail and ate lunch. I sat for a few minutes after I ate and then I got going again, and on the trail, things were pretty easy. 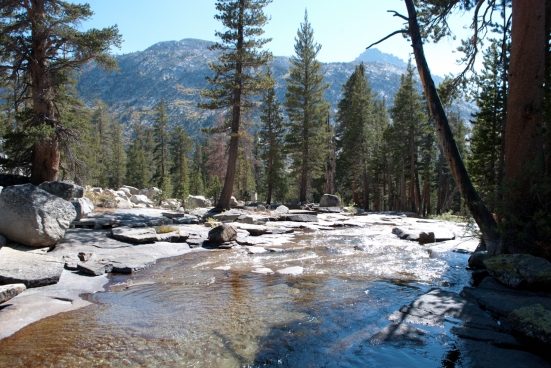 I would follow the Piute Pass trail until it started turning south, toward Hutchinson Meadow, where I would then turn, heading northwest to pick up the French Canyon trail. 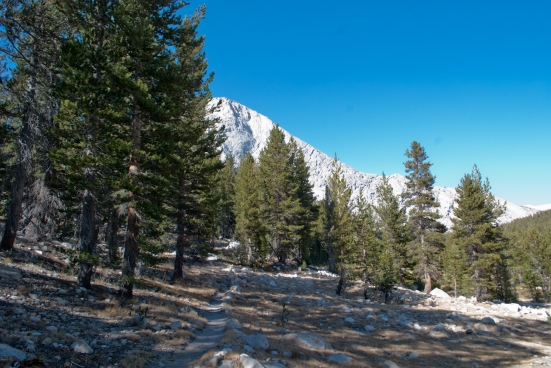 I found the trail and followed it north and up for about two and a half miles before seeing a clearing in some dirt and sand about 50’ below the east side of the trail. It looked like a great campsite and I headed down there. There ground was level and the dirt didn’t look uncomfortable. I noticed other footprints and horse prints throughout the campsite and could see it had been used before.

Merriam Peak was just to the north and I could hear a creek in the distance to the east. I set up and headed down to the creek to fill my water bottles for dinner. My camera battery indicator was flashing red, so I was very conservative with pictures this evening.

After I ate, I sat looking around and listening to all of the sounds until I got sleepy. When I climbed into the tent, I noticed that my therm-a-rest wasn’t inflated…I checked and it was punctured. I looked at the sleeve I carry it in, and it had been ripped by the granite boulders while climbing down from Knob Lake, earlier.

I was bummed, but not bothered; I just made a bed out of clothes and my down coat and curled up in the sleeping bag on top of it all.

I made it down.